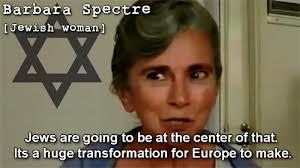 In a short expert from "The Jewish Community of Sweden," an Israel Up Close broadcast, Barbara Lerner Spectre, who runs a government-funded Jewish study group in Sweden, makes the following statement on the Jewish involvement of multiculturalism and immigration of non-Europeans into Europe:

"I think there is a resurgence of anti-Semitism because at this point in time Europe has not yet learned how to be multicultural. And I think we are going to be part of the throes of that transformation, which must take place. Europe is not going to be the monolithic societies they once were in the last century. Jews are going to be at the centre of that. It’s a huge transformation for Europe to make. They are now going into a multicultural mode and Jews will be resented because of our leading role. But without that leading role and without that transformation, Europe will not survive."

Spectre is a founding director of Paideia, The European Institute for Jewish Studies in Sweden, a non-denominational academic institute established in 2001.

Although you can find this mp3 as a video on YouTube and other video sharing sites, it is often censored as the original broadcast has proven embarrassing for many Jewish groups that want to distance themselves from the problems of immigration into Western nations like Sweden, France, the US, Germany etc.